10% Credit on Qualifying Heating Appliances and Stoves - Up To $300 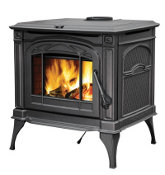 A federal tax credit on 75 percent efficient biomass heating appliances, which expired on December 31, 2011, was reinstated by the “fiscal cliff” legislation, the American Taxpayer Relief Act of 2012 (H.R. 8), signed by President Obama on January 2, 2013. The bill includes a tax extender for Internal Revenue Service Section 25C which provides a tax credit for, among many other things, qualifying biomass burning stoves.

The extender provides a 10 percent tax credit of up to $300 on a qualifying biomass heating appliance purchased between January 1, 2012 and December 31, 2013. The credit has a lifetime limit of $500 and may be impacted by the purchase or installation of other products that qualify for a 25C credit.

Use these helpful links to get more information and forms: